The United Nurses of Alberta (UNA) has “rejected stability during a pandemic” by demanding labour talks next month, charges Alberta’s finance minister.

But the UNA says enough time has gone by since the leadership agreed to press pause on collective agreement negotiations when the pandemic struck the province in March. Now, it’s asking AHS to resume bargaining talks Nov. 16.

AHS “rejected that proposal, instead suggesting that the two bargaining teams next meet on March 31, 2021,” the union said in a Thursday statement.

“UNA declined the AHS position to delay negotiations until 2021, as well as an offer to delay layoffs until that date. UNA believes that any layoffs should be postponed until a new collective agreement is reached,” says the nurses’ union.

“AHS said it will not agree to postpone layoffs until a new agreement is reached.”

Now, the union says it will wait for AHS to find a date sooner than 2021 to resume negotiations.

UNA’s negotiations committee will meet next week to sort through the next course of action.

Until then, the union is asking that AHS provide updates regarding the status of:

— Operational best practice (OBP), specifically a list of areas where changes will be made as a result of this non-evidence-based program and the extent of changes already made and changes expected.

— Contracting out of home care services, including nursing, palliative and pediatric care.

— Reconfiguring services provided at smaller health care worksites. AHS had indicated that this may commence in 2020.

— Closing acute beds as continuing care beds open. AHS indicated that this may commence in 2020.

— Reducing clinic visits in all zones by targeting those that could move to non-hospital facilities: AHS indicated this may commence in 2020.

— Changes to staff mix and service redesign, including changing and repurposing health care worksites, relocating services, and reducing or ceasing provision of services. AHS indicated that this may commence in 2020.

— UNA has also requested an update from AHS on the details of plans to implement recommendations from an Ernst and Young Review.

Toews, meanwhile, argues that the UNA is demanding “overreaching and disingenuous” indefinite job security, something he calls a “shameful effort to take advantage of a health crisis.

“It’s unfortunate that union leadership wants to force uncertainty on their members, and all Albertans, while we continue to deal with COVID-19.”

“We proposed the current no-layoff letter of understanding continue until a new collective agreement is reached.”

US weekly jobless claims fall to 840,000, above economist forecasts

Wed Oct 14 , 2020
New US jobless claims for the week that ended Saturday totaled 840,000, the Labor Department said Thursday. The reading landed above the consensus economist estimate of 820,000 but marked a slight decline from the previous week’s revised figure. Continuing claims, which track Americans receiving unemployment benefits, fell to 11 million […] 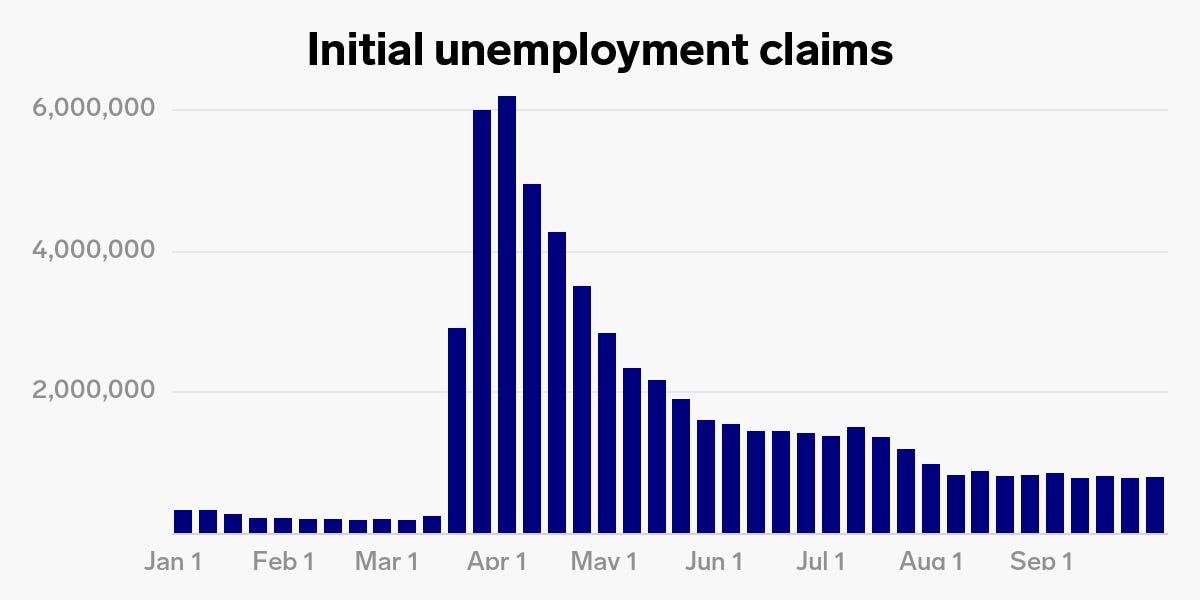