Updated at 6:45 p.m. after Zoom event WASHINGTON — Joining forces with MJ Hegar, Beto O’Rourke blasted Sen. John Cornyn Thursday night as “the single greatest enabler of Donald Trump in the U.S. Senate”— urging Texans to oust the three-term Republican to save the nation from a lawless and dangerous […]

WASHINGTON — Joining forces with MJ Hegar, Beto O’Rourke blasted Sen. John Cornyn Thursday night as “the single greatest enabler of Donald Trump in the U.S. Senate”— urging Texans to oust the three-term Republican to save the nation from a lawless and dangerous president.

“If you want to end not only Donald Trump but Trumpism in America, it is essential that we defeat John Cornyn,” O’Rourke, a former El Paso congressman who came within a whisker of ousting the state’s junior senator, Ted Cruz, two years ago, said on a Zoom fundraiser event with Hegar.

Citing Cornyn’s acquittal votes in Trump’s impeachment trial, he added, “He’s just so craven and so complicit in the destruction of our democracy and potentially the end of this republic.”

Hegar joined the pile-on, calling Cornyn a “spineless bootlicker” whose refusal to stand up to Trump offends Texans who want independent-minded leaders. “The truth hurts …. People would rather vote for the ass-kicker than the bootlicker.”

The rhetorical assault marked an escalation in Texas Democrats’ efforts to turn the Senate contest into a referendum on Trump. O’Rourke came within 2.6 points of ousting Sen. Ted Cruz two years ago, the best showing for a Democrat in Texas since 1994.

The joint event gave Cornyn an opening to reprise efforts to use O’Rourke — who is much better known than Hegar — as a foil. A fundraising email blast declared that “Beto is back!” and warned that “They both want the same thing: Big money to enrich the liberal mob, weaken our communities, and install the dangerous leftist agenda for decades to come.”

The allegation prompted a sharp rebuke from Hegar.

“It’s not a mob. It’s his constituents,” she shot back during a press call earlier Thursday. “I take real offense to him calling a grassroots movement of regular working Texans — his constituents, by the way — calling them a mob. There isn’t a mob here in Texas.”

Cornyn also sought to tar Hegar with some of O’Rourke’s more liberal positions, particularly on guns.

“He supports mandatory gun buybacks. She supports banning assault weapons and open carry. He’s a Green New Dealer. She wants new energy taxes. He’s a twice-failed candidate who became the sweetheart of the liberal media. She’s been running for office perpetually for years now,” Cornyn wrote in his email blast.

In fact, Hegar has rejected O’Rourke’s demand for mandatory buybacks of assault-style guns, which gun rights advocates consider a form of confiscation — one of several points on which she has positioned herself as more of a moderate than O’Rourke did during his presidential bid.

But she has also failed so far to capture the national attention and torrent of donations that O’Rourke generated when he ran for the Senate in 2018.

O’Rourke held Cruz below 51% — the closest any Texas Republican has come to losing a statewide contest since 1994.

“Beto showed us how close these races can be… I can stand on that foundation,” Hegar said during the Zoom event, arguing that the excitement of that race has infused Texas Democrats with enthusiasm in 2020 and left Cornyn reeling. “You can see how terrified he is.”

O’Rourke agreed that she has built on his advances.

Both Cruz and Cornyn have warned fellow Republicans that Texas is a battleground this year, and trending away from the tight grip the GOP has enjoyed for decades.

“Texas’ least favorite politician has teamed up with my opponent, Hollywood Hegar, to raise big money from their liberal base. It’s a political match made-in-heaven for coastal elites,” Cornyn wrote in his email asking donors for $50 or more “to make sure Beto doesn’t help MJ flip Texas blue.”

Up until the filing deadline for the March primaries, in fact, Cornyn issued warnings that O’Rourke might yet jump into the race against him, as a way to drum up donations.

On Thursday, the senator employed mocking language in his effort to round up donations.

“Robert Francis ’Beto’ O’Rourke is back!” his email declared — adopting the schoolyard taunt that Lt. Gov. Dan Patrick and other Texas Republicans have used, by insisting on use of O’Rourke’s full name rather than the nickname he and his family have used since birth.

Patrick was been especially caustic during the 2018 campaign in asserting that the use of the nickname “Beto” is a disingenuous effort to appeal to Hispanic voters, though family photos show O’Rourke as a toddler wearing a sweater embroidered with the name, dispelling the claim that he only began using it later in life to further his political ambitions.

Mon Sep 7 , 2020
A screenshot from part of a Life Insurance Awareness Month 2020 chat that took place on Twitter Wednesday. (Credit: Life Happens) Too many people think of buying life insurance as something boring that they ought to do, a top financial advisor said Wednesday. The first step toward persuading the uninsured […] 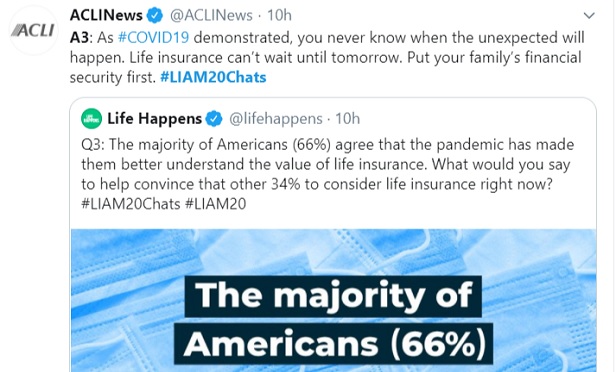